It’s time for another City Guide! This time, i’ll show you all of my collected Dresden highlights. But before diving into them, let me give you a quick overview:

Being the capital city of the German state of Saxony, Dresden has a lot to offer when it comes to tourist attractions. Beautifully located on the River Elbe the city is furnished with historic and cultural splendor. Especially after the german reunification (1990), Dresden became also an educational and political center in Germany.

With that being said, let’s dive into the Dresden highlights you shouldn’t miss while exploring the city.

I’ve divided all of the highlights into two parts: The ones in the old town and the new town ones. Here’s a Table of contents where you can skip to whichever point you want.

The old city of Dresden houses some of the most prominent buildings like the Frauenkirche and the Zwinger. While strolling through the city you’ll not only find beautiful, historic buildings but also cute cafés and restaurants. Pretty much everything is within walking distance and you’ll find many beautiful spots while strolling around.

Frauenkirche - Church of our Lady

The Frauenkirche is definitely the most prominent Dresden highlight and can be found at the Neumarkt. Built in the 18th century, it was destroyed during World War II. From 1994 to 2005 the church was completely rebuilt under the aspect of using as many original pieces as possible. After the re-opening the church, it inspired many other revitalization projects in Europe like e.g. the City Palace in Berlin.

Today you’re not only able to visit the church on the inside (really impressive) but also climb up the dome to enjoy the view over Dresden. I’d definitely recommend climbing up the dome but please be aware, that it includes a lot of stairs which require a basic fitness level.

FYI: Taking pictures inside the church is officially not allowed.

Another famous (and actually my favorite) landmark in Dresden would be the Zwinger. Being one of the most important buildings of the german baroque period the palatial building hosts a splendid garden area. Built under the reign of August the strong in 1709 as an orangery and representative festival area, the palace hosts museums with some state art collections today. The garden area itself is absolutely beautiful and you can walk along the outside gallery with a view to the city and the garden.

Fun fact: we found the Zwinger to be mostly empty at sunset on a Sunday. (Can you believe that?! I still can’t! We returned the next morning and it was way more crowded!!)

Located between the Zwinger and the Castle, the Semperoper is the opera house of the Saxon State Opera, the Orchestra, and the Ballett.

Built in 1841 and named after the architect Gottfried Semper, it also got largely destroyed during WW II. Luckily, the Semperoper has been rebuilt as well. Today, it magnificently rises in the historic center and is considered as one of the most beautiful opera houses in the entire world.

Today you can visit the Semperoper with a guided tour or – of course – visit one of the shows to experience its unique flair.

The Dresden Castle is one of the oldest buildings in Dresden and acted as the residence of the electors and kings in Saxony. Today, the Royal Palace opens its doors for visitors all over the world and is well known for its fascinating museum complex. With the Green Vault, it actually contains the largest collection of treasures in Europe. Especially the Historic Green Vault (Yes, there’s two!) is known for the treasure chambers and the baroque art of the chambers itself.

Important here: you should book your tickets for that room early since the number of visitors is limited. Tickets are issued for a certain time window and should be booked online around 2-3 days before your arrival there.

Since we didn’t know that we couldn’t get any tickets for the Historic Green Vault (they were sold out at 11 am for that day). We „only“ visited the rest of the Residenzschloss which is still though absolutely worth it. The regular ticket includes:

This large mural of a mounted procession of the rulers of Saxony can be found between the Frauenkirche and the Dresden Palace on the outer wall of the Castles Stables Courtyard. With its length of 102 meters, it’s not only hard to take a picture of it but is also known as the world’s largest porcelain artwork.

This building is not very typical, to say the least. The Yenidze is a former cigarette factory a little outside of the historic city center. It’s known for its exterior design which borrows elements from mosques why some also still call it the „tobacco mosque“. Nowadays it is used as an office building and hosts a panorama restaurant on the upper floors.

You’ll have the best view of the Yenidze from a parking garage across the street, the „Parkhaus Mitte“.

Offering a great view, the „balcony of Europe“, as the Brühl’s Terrace is also called, is a large promenade along the Elbe river. It’s a perfect spot to stroll around, have some coffee, talk, watch other people passing by, and simply enjoy the view on the river and the Augustus Bridge.

… oh – wait a second. Before continuing in the inner new town, I need to cover one more attraction:

The Striezelmarkt is one of Germanys most famous Christmas markets and also considered as the world’s first genuine Christmas market! With over 200 stands it attracts millions of visitors from all over the world. It takes place throughout the Advent season and finishes on Christmas Eve. If you’re there during this period: you simply can’t miss enjoying it with gingerbread in one hand and some mulled wine in the other. It’s simply magical!

Puh… that was already a lot to see, right? But you can’t miss out on the Neustadt! So let’s dive into the Dresden Highlights for this part of the city:

After crossing Augustusbridge you’ll slowly dive into another world. On the other side of the bridge, you’ll first find another famous sight, the Goldene Reiter.

But after this, it’ll turn from historic, splendid buildings to modern and hip areas full of street art. It’s associated with counter-culture and anti-authoritarianism and will surprise you with artsy places and a lot of street art and graffiti.

I’d definitely recommend to just go with the flow and explore the area by foot since you’ll see most like that. The graffiti change from time to time so you might find some cool new artwork at some places you wouldn’t expect it. Enjoy!

Here are the two most famous attractions in that part of the city:

The Pfunds Molkerei is one of the oldest milk shops and famous for its lovely design which even made it win a Guinness World Record.

Let’s be honest here: this place wasn’t like we expected it to be (in a negative way). I’ve seen it all over Instagram and I’ve been so impressed – I wanted to see it with my own eyes.  Well… here’s what nobody tells you: there’s a Hop-On/Hop-Off Bus stop directly in front of the shop so it’s unbelievably crowded with tourists taking pictures of every little detail.

Talking about pictures: it’s actually forbidden to take any pictures in there. We were a little disappointed because we obviously brought our camera and wanted to take pictures like we’ve seen them all over TripAdvisor and Instagram. Honestly – we could have taken some (the staff really didn’t care and everybody obviously took pictures) but we felt uncomfortable breaking the rules. We ended up snapping a pic of the delicious Kondensmilchgrappa (a liquor made with condensed milk) and one of me enjoying the sun after finally getting to sit down lol.

Above the shop, you’ll find their cafe where we tried a local specialty, the „Eierschecke“. My boyfriend had a delicious milkshake and my „Eiskaffee“ was delicious as well. The café itself was nothing special though… the staff was quite unmotivated, slow, and not that friendly.

Summing this up: It’s definitely worth seeing but you might wanna go in the morning after they opened their doors to avoid the crowds and be prepared that there are no Instagram-able photo shootings allowed in there 😉

To revive some of the old, dilapidated backyards, the Kunsthofpassage was built over twenty years ago. With five different and individually themed backyards, you’re getting invited to stroll around the houses with their artwork and see the little shops with eg. handmade pieces of art or sustainable clothes. My favorite shop was the one offering more than 300 brands of beer from all over the world though 😉

Of course, these attractions are not the only ones to see. Depending on your interests, you might also want to check out:

In case you have a bit more time, here are some of the prominent attractions outside the city:

We combined our stay in Dresden with a little trip to the Elbsandsteingebirge (Elbe Sandstone Highlands) where we visited the famous Bastei Bridge and hiked through the Schwedenlöcher.

Click here to read the blogpost about visiting the Bastei Bridge. It includes some tips and the exact trail along with the (photo-)spots we hiked.

Now you’re all set to explore the city! I hope you found my collection of Dresden Highlights helpful. I’m sure you’ll have an amazing time and I’d love you to let me know which attractions were your favorite. Leave me a comment down below!

Are you following me on Instagram already? No? Well, let’s change that now! Click here to stay connected, up to date, and follow me along my travels.

Thank you for reading! 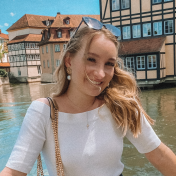 Hi there, I'm Julia. I am a german native travel blogger and content creator showing you the world through my eyes. Welcome to the page!

Leave some love and join the tribe!

THE GIRL BEHIND THE BLOG

Hi there, I'm Julia. I am a german native travel blogger and content creator showing you the world through my eyes. Welcome to the page!

Sleeping on a plane – it’s always been a mystery. Getting off an international flight without feeling tired and groggy seems like something you simply can’t avoid. But how can we hack traveling to the point where we are actually getting some rest on board? Of course, there is nothing like a nice queen size…

END_OF_DOCUMENT_TOKEN_TO_BE_REPLACED

A virtual storybook about my champagne life on a tomatojuice budget 📸
♡ eat, sleep, travel repeat
✍︎ sharing my fav spots with you
𖡡 nue, de

Last weekend I cleared out my closet and found the

"When the sun whispers goodbye in soft gold, it hu

Remember those summer days where we were actually

Thanks for stopping by! Let's stay in touch :-)